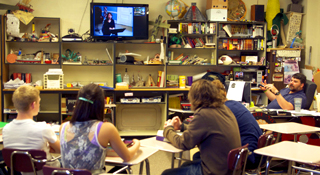 Kenai Central High School teacher Greg Zorbas leads a sophomore world history class in a session of Classroom Without Walls on April 26, connecting students at KCHS, Soldotna and Skyview high schools with an instructor from the Manhattan School of Music.

For hiking, camping, fishing or other outings related to the natural world, the Kenai Peninsula offers some impressive field trip opportunities for students. But though our mountains may tower above those available to students in, say, Boston or New York City, the peninsula is dwarfed by the art galleries, museums, historic sites and other enrichment options available in larger, better-connected urban areas.

At least, that used to be the case. Today, with growing use of increasingly sophisticated technology, local students don’t have to miss a thing. They may not be able to get out into the world to enrich their classroom experiences, but they can bring the world into the classroom.

Just this year, students from different schools have read, practiced band, done physical education and collaborated on projects together. Sophomore history and language arts students studying George Orwell’s “Animal Farm” spoke with a Russian immigrant whose father was a Gulag survivor to learn what life was like in Stalinist Europe. Kenai Central and Skyview high school music classes performed live for a children’s hospital in Minnesota. At Sterling Elementary, Tiffany Grey’s class collaborated with students in the Lower 48 and the Czech Republic. At Kaleidoscope, Jan Darch and Keli Stroh connected their students with an expert on marine life from New Jersey.

At Kenai Central and Skyview, seniors in language arts capped a section on African literature by visiting with Kenyan freedom fighter Field Marshal Muthoni Kirima, who led the fight against British imperialism in the 1940s. High school students also have visited with their peers in Israel and Afghanistan. Sophomores at Kenai Central, Skyview and Soldotna high schools watched and listened to a lesson created and delivered just for them from the Manhattan School of Music. 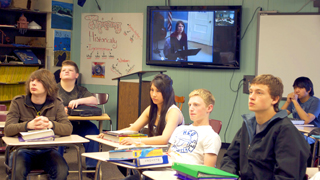 Students from KCHS listen to a lesson delivered via videoconferencing from the Manhattan School of Music. Classes at Soldotna and Skyview high schools were participating concurrently through the Classroom Without Walls program developed by Zorbas, Gregory Weissenberg at SoHi and Rob Sparks at Skyview.

And all without leaving their classrooms, thanks to videoconferencing technology, which allows students to see, hear and interact with people across the school district, the state, the country and the world.
“It’s just pretty dang amazing what we’ve exposed our kids to this year—face-to-face interactions with kids in Afghanistan and Israel, direct, interactive instruction from one of the most prestigious music schools in the United States,” said Greg Zorbas, history teacher at Kenai Central who, along with Rob Sparks at Skyview and Gregory Weissenberg at SoHi, pioneered use of Polycom videoconferencing in their classrooms in developing the Classroom Without Walls program six years ago. “We don’t live in Boston or New York. We have some places we can go on field trips around here, but we’re limited in that. But now you can go anywhere you want in literally a day. And it’s interactive; you’re not just watching something on TV. The people out there doing this know it has to be interactive—that’s what keeps the kids hooked into it.”

History classes of Zorbas, Weissenberg and Sparks had one of their Classroom Without Walls sessions April 26, with a guest instructor from the Manhattan School of Music teaching about the development of nationalism in music in the nineteenth century. The instructor appeared on screen in all three classrooms, interspersed with views of the other classrooms.
“This is really a big change in the nineteenth century, the artists’ emergence as an agent of social change. What does this mean to us today? Think of media icons who you think can really affect a large amount of people. Kenai, what do you think?” the instructor asked.

A little later in the session, the instructor went to her piano and started performing classical music from the nineteenth century to demonstrate her lesson—a world-class live musical performance, on a Thursday, in between lunch or study hall or whatever else the regular school day entailed for the students.
“It’s amazing to me what we can do now. Six years ago when we started this I could never even fathom it would take us where we are now,” Weissenberg said.

The highlight use of the technology for him so far—and one of his favorite overall moments of teaching—is the collaboration on Animal Farm this spring. In past years, Weissenberg has talked to classes at SoHi and Skyview in person about his experiences growing up in the Soviet Union to add a little flavor and context to the book. This year, through Polycom, history and language arts students at SoHi, Skyview, Kenai Central and beyond were able to interact with each other and with the special guest speakers Weissenberg lined up all the way from Boston. 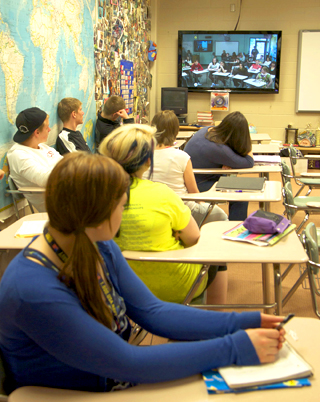 A class at Skyview interacts with students at Kenai Central during a session of Classroom Without Walls on April 26.

Weissenberg had met, through family connections, a 70-year-old immigrant in Boston whose father had been arrested under Stalin’s regime in the Soviet Union. He invited the man, Vadim Feldman, and his son, Iona Feldman, to give a presentation and answer questions through videoconferencing.
“The whole opportunity of being able to speak with Alaska, it was interesting how we on the East Coast could have an opportunity to connect with students in a very different part of the county, and be able to share these experiences,” said Iona Feldman, who translated for his dad during the presentation. “The whole idea of talking with Alaska, because Alaska, for us, is on the other side of the country and seems like a very different place from how it is here, may have been a bit intimidating but something I was interested in doing. The experience of sharing our story to people in Alaska, I think, was very valuable because with all these stories there’s much that can be learned with them.”

Likewise for the Alaska students getting to interact with people currently from back East and, ultimately from Eastern Europe.
“When you have someone sit in front of a classroom and connect with students, it’s a pretty groovy tool. It’s more personal because you meet people. [Being in Alaska], we just can’t drive down to wherever it is to do something like this. So [Polycom] really is a handy way to make those connections,” said Terri Zopf-Schoessler, language arts teacher at Skyview.

Still, though, as groovy as the screens and remotes and other cool features of the technology may be, what it ultimately does is enhance the basic building blocks of good teaching.
“Technology is a tool. We didn’t do it because, ‘Ooh, we used fancy technology.’ The purpose of technology is to increase connections, which supports the purpose of teaching. We are connecting a novel to history and to today’s students. This is a tool in widening our window to who we can connect with and talk to, which I think is remarkable,” she said.

James Harris, a teacher at SoHi, said this was his first experience with Polycom and he was extremely impressed.
“They [the students] were able to put a face to the suffering, empathize with it, and internalize it. One of my favorite points of the presentation came after one of my students asked how [Vadim Feldman’s] experiences in the Ukraine and knowledge of his father’s history affected his outlook on America. Both the students and the presenters—and a few of the teachers, too—teared up a bit, and we all gained a new understanding and respect for the opportunities this country gives us,” Harris said.

For Sparks, widening student experiences on the world scale was the highlight of the program this year.
“Our global connections, when we hooked up with Arab Israeli students in November, and recently in Kabul, Afghanistan. The kids were able to talk with kids in other parts of the world. As a teacher, it’s been really encouraging,” Sparks said.

The videoconference with students in Afghanistan took place just a few days after news broke of a Taliban offensive carried out just a few blocks from the school in Kabul.
“Here a few days later we get to talk to a group of teenagers who were literally right in the middle of the battle zone. To hear their laughter and enthusiasm and optimism for the future, that it makes them even more motivated to get an education and reach out, especially to Americans. It was just a really powerful day for me, and the kids said the same thing,” Sparks said. 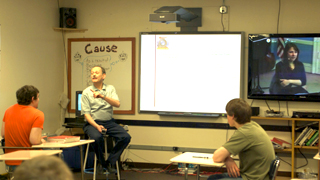 Gregory Weissenberg at Soldotna High School leads his students in a discussion while an instructor from the Manhattan School of Music delivers a lesson on nationalism in music developed specifically for the Kenai Peninsula schools.

What started as the Classroom Without Walls project six years ago has expanded past many more boundaries than just walls. It’s not just the tenth grade classes of Zorbas, Weissenberg and Sparks that utilize Polycom. Other teachers and schools make use of the technology for content areas far beyond just world history. Anymore seeing that growth is more rewarding than finding new ways to enrich just their classes, the three said.

Encouraging other teachers in other schools was a main goal for Zorbas, Weissenberg and Sparks this year. In February, the global education director from Polycom came to the Kenai Peninsula and put on a workshop for forty teachers across the district. Fittingly, the workshop took place over eighteen videoconferencing units.
“Because of that event all these units were brought out of the boxes and dusted off. Now everybody knows where they are and what the numbers are and has access to use them,” Zorbas said. “We’ve accomplished something this year by getting some more people to use it. That’s the biggest thing we want to get from this now, we’re trying to say, ‘Hey, you guys, take this and run with it. You don’t have to do what we’re doing, just try to take this video and enhance what you’re doing.’”

Sparks and Zorbas, with Weissenberg retiring this year, are planning how they can continue to collaborate through videoconferencing, get Classroom Without Walls events broadcast online so parents and community members can follow along, and thinking of how they can revamp how they teach their classes—doing so thematically and with a team-teaching approach.
“There’s so much potential for just more of this collaboration, which we thought we were doing a lot of at this point, but we’re realizing there’s so much more potential. We’re excited about it and are really going to take it further,” Sparks said.

Being involved in as many conferences and learning opportunities as the three have now, they’ve come to see just how far videoconferencing has come, as well as where they’d like to take it.
“The comments we’re getting from people are, ‘Wow, you guys are so cutting-edge,’ and I guess we’re aware of that, but when we hear people from outside going, ‘Wow, this is really frontline stuff,’ what’s really nice to know is we’re giving our kids an advantage with some of the skills we’re developing in small-town Kenai and Soldotna,” Sparks said. “When we looked at this list [of Polycom events this year], compared to what we did the first year, it was like, ‘Holy cow.’ We didn’t realize everybody has done so much with it, and the ideas we have for the future are going to make this year look like the beginning again.”